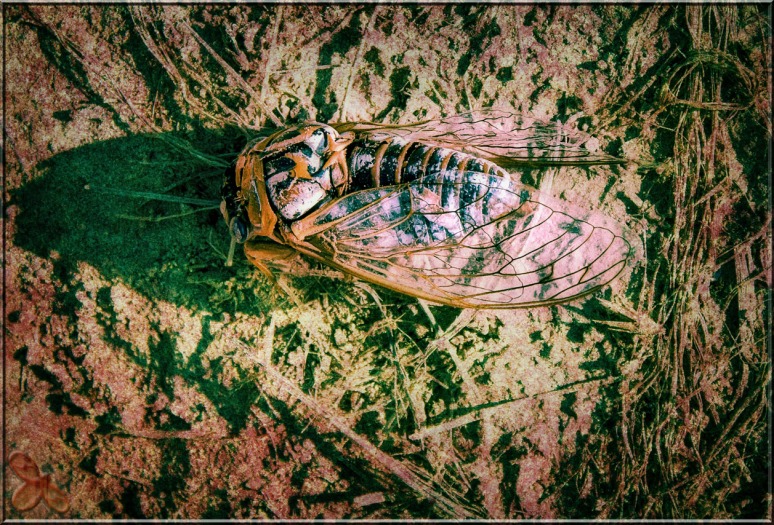 Perhaps it’s these cold, dry days of winter. Or perhaps it’s just the loneliness that inevitably comes when your work is of a solitary nature. But some days I feel like the cicada in this picture: desiccated. Dried up. Spent. Chances are, you’ve felt this way yourself some days.

I took this picture last fall, in the waning days of the cicada, during the last desperate efforts to seek out a mate and ensure the survival—if not of the individual—then of the individual’s DNA. I don’t know if this guy succeeded, but if he did, it was almost definitely the final act of his short-long life. The ants and other scavengers hadn’t yet found him by the time I did, so I believe he probably had only died a short time beforehand.

If you know me, then you probably know that I used to be obsessed with cicadas (ahem, NOT locusts, thank you very much). I’d scour the neighborhood trees all summer, listening for their distinctive call, waiting patiently to see one move and unveil itself from its camouflage. If it had picked a spot on a low enough perch, I’d sneak up behind and cup it in my hands. I’d then place it in a birdcage I once bought for a dollar at a garage sale and give it a nice “home” for it to spend out the rest of its life—what amounted to never more than another couple of days. I thought I was doing them a favor, rescuing them from the birds and the cicada killer wasps that would otherwise make a nice meal of them. But what I hadn’t realized was that I was keeping them from doing the one thing they had gone to all the trouble to hatch out of their shells to do in the first place: mate.

I’m still dumb-founded by the life cycle of the cicada. Why does nature go to so much trouble to create this insect that spends years underground, developing in its thin shell, only to live for a few days in the glory of the trees and skies? What I’ve come to appreciate in my studies and contemplation since the days of my cicada capturing is that nature is a harmony of extremes and in-betweens, and it would be more surprising if there weren’t creatures who did live out their life cycles this way. To be sure, they are among the longer-lived insects, even if most of that life is spent in a dark burrow among the roots of their birthing trees. I suppose perhaps they would take the trade-off, just to be alive that long at all.