A funnel cloud formed near our location and lasted only briefly. A tornado was reported with this particular storm close to the time this was taken, but we could not confirm that there was also circulation at the ground associated with this funnel cloud. 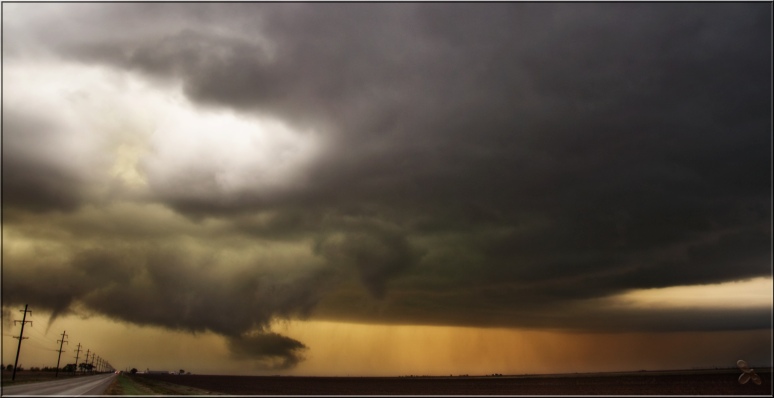 Panorama of the supercell with wall cloud and the setting sun. Click on the image for better detail.

This is how the storm appeared in its early stages before it became a supercell. It almost looks to have a face. Do you see it?

View of the storm before it reportedly became tornadic. The bright white area below the cloud layer isn’t rain–it’s hail! Hail up to 2.75 inches was reported with this storm.

A nice view of the rotating wall cloud. 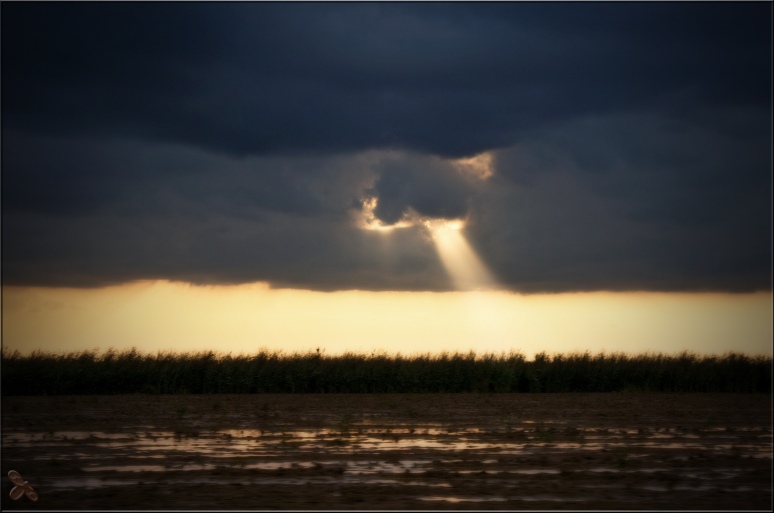 The atmosphere provided more than violent weather—it also created a beautiful sky. Here a crepuscular ray shines on a corn field waiting to be harvested. The field in the foreground is flooded from the hail and rain that just passed over.

Another example of why you should make sure you look all around you and not just at the action going on in front of you! This beautiful scene was occurring in the sky opposite  the storm. In this case, the crepuscular rays are pointed heavenward. I half-expect a chorus angels to start singing and playing their harps when I see this picture.

Well, I promised more photos of severe weather in yesterday’s lightning gallery post, and I hope these don’t disappoint!

This is a fairly diverse image gallery representing the storm and sky as they evolved through the course of the late afternoon and early evening.

We had left the house early in the afternoon and situated ourselves where we could follow a storm if it developed. Usually we finish a day of storm chasing disappointed, but this was not one of those days. We followed only one storm, but it gave us all we expected. We watched it grow from cumulus congestus all the way into a mature supercell storm. A prominent wall cloud developed, and at least one tornado was reported. From our vantage point, we never confirmed that there was a tornado on the ground, but we did see at least one (and perhaps more than one) funnel cloud emerge from the storm (which may or may not have had associated circulation on the ground—i.e., been a full-fledged tornado).

Most of the pictures above were taken from our car as we sped down the (mostly back-country farm) roads chasing the storm. None was taken on a tripod. Therefore the quality isn’t as great as I would hope for had I had time to set up my tripod and expose properly. The foreground is “moving” in a couple of them. Nonetheless, I think I had a fairly successful photographic journey that day.

The panorama was especially difficult; in each of the three images used to create the composite, the exposure was different (there was no time to try to set it manually), and the foreground was distorted. I had to do quite a bit of tweaking to get them to fit properly and be (more or less) exposed to match each other. There is a lot that I don’t like about it and would do differently if I could start over again. Maybe one of these days I will take another stab at it and see if I can create a final product I’m happier with, but for now I think it at least captures a little of the grandeur that we were lucky enough to witness that day.

EDIT (October 18): It has been confirmed that there was circulation at ground-level associated with the pictured funnel cloud. Therefore, it is officially a tornado.