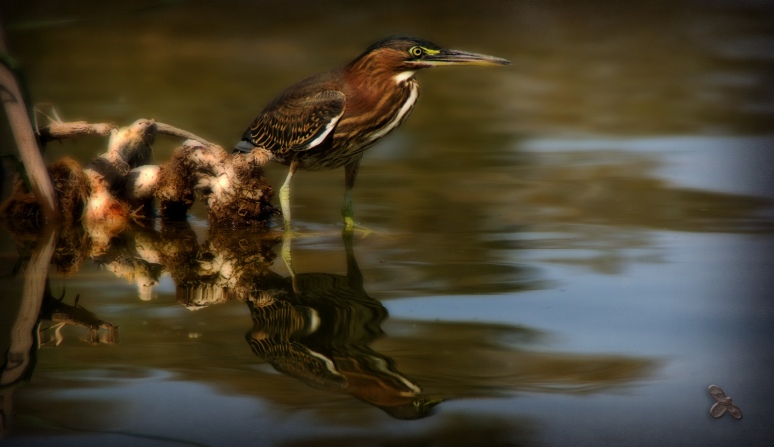 So you wanna see a trick, eh? All righty, then… 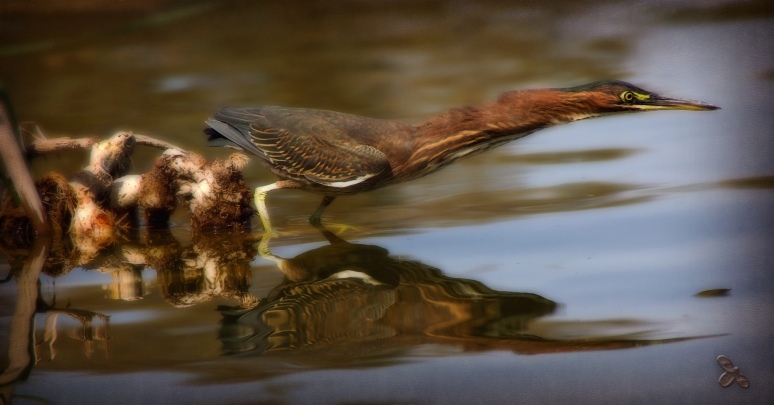 Look it here! Pretty amazing, huh? I can extend my neck really far…Bet you didn’t think I could, did you?

I did my trick for you, see? Now get the hell outta here! It’s time for my lunch.

Like most folks who live in the middle part of the US, we get lots of migratory birds passing through in the fall and spring. This year has been no exception. In fact, because of the widespread drought that’s plagued most of the mid-section of the country, we’ve seen more birds earlier in the season than before. Even though it’s been hot, I think they’re moving farther away from their normal summer roosting areas in desperate search for food.

We get a lot of herons and egrets. It’s not unusual to see great blue herons in the middle of the city. If you’ve ever seen one of the behemoths, you know how majestic they are in flight—and also how out of place these giant birds are trying to forage in small city parks.

I wanted to photograph some of these herons at one of the larger city parks known for being a refuge for water fowl. I did find a few, but I ended up spending a lot more time “camera hunting” this smaller green heron instead. They don’t stand out nearly as much as their much larger great blue cousins, but they are just as fascinating to watch.

I found this guy (or, more accurately, my husband spotted him first and pointed him out to me) in a corner of the waterway where a bunch of damselflies were feeding and mating. He was enjoying a veritable feast of those little blue fliers. He kept his eye on me, but was clearly reluctant to give up his prime feeding spot. So he decided to give me a show. These photos summarize pretty well the act he put on, and I think it was pretty clear that he expected this to be enough to get me to move on. He even “barked” at me a little, as if trying to scold me, “What more do you want? You got your stupid pictures!”

Eventually, a “friend”—another green heron—came along and teased him a little and the two flew off together.