Pollux Gets a New “Backlook” on Life 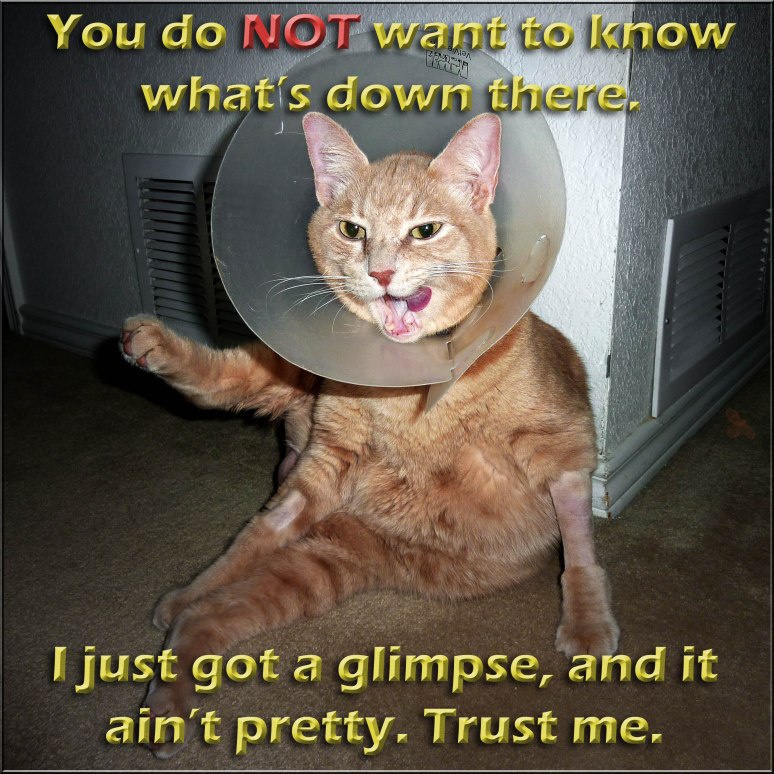 My cat Pollux is finally back at home after a nearly two-week hospital stay. His recent troubles are a lot of the reason why I haven’t posted much lately. I’ve been back and forth to the veterinarian’s office to visit and to check up, and to eventually agree that he should have major surgery. So, this past Wednesday, he underwent perineal urethrostomy surgery. If all goes well, he’ll never have trouble peeing ever again.

If you’ve been following my blog, you might remember I posted an image of his x-ray at the beginning of this very long journey. We still have a long recovery ahead, but his spirits are high and he likes to demonstrate that he’s ready to cuddle with me or to hunt birds from the back window as if nothing has happened. Unfortunately, he has to be isolated in a room alone, which is hard for this very active and social cat. But it’s a lot better than the tiny cage he was in for so long at the vet’s office. One step at a time!

For those of you who might be interested in Pollux’s story, I will share it with you. Fair warning–there’s a lot of medical and anatomical lingo!

He is a five-year-old Manx cat. His brother, Castor, was born with a full-length tail. Pollux was born with essentially no tail (except the vestige you can detect on his x-ray), and has some associated anatomic abnormalities. He has what is loosely called “Manx Syndrome.” From what I gather, most cats with this syndrome have some difficulty walking (if not outright paralysis) and are often incontinent. Pollux is very strong and has always been a better leaper than even his twin brother. And he’s never been incontinent.

But even as a kitten Pollux had other difficulties. He stopped growing while his brother got to be about twice his size. He switched between diarrhea and constipation. He suffered from a prolapsed rectum. We tried medication and minor procedures before having to resort to his first major operation–a colopexy (where the colon is permanently attached to the abdominal wall). He continued to have some problems with constipation–similar to megacolon, where his stools were too big to pass–and we eventually had to put him on medication (Lactulose) to maintain normal bowel movements.  Other than a few minor bumps along this way, this was enough to keep him happy and healthy for a number of years.

And happy he has been. He has rewarded me with a kind of loving joy that no other creature has. He demonstrates his loyalty by greeting me at the door and leaning against my leg (rather than rubbing, like most cats) to show his affection. He purrs as soon as I lay a hand on him or whenever I “talk” to him in my kitty voice.

He is always ready to play. A few years ago he discovered the joy of Q-tips, and they have become his favorite new toy. Like a dog, he likes to play fetch. He will bring me his Q-tip, drop it at me feet, and mew plaintively. When I pick up the “prey,” his eyes dilate and he prepares to launch into action. I throw the Q-tip and within moments, he’s returned it to my feet. This can go on for a while. When I’m indisposed, he tosses the Q-tip into the air and tries to catch it with his mouth. When he’s done playing with his “prey,” he leaves it in his food bowl and begins his feast.

All was well until about 18 months ago. Then he started straining when he tried to pee. He’d growl at his underside. He’d run around the house, stopping at regular intervals to lick the offending area. Poor cat not only has chronic trouble pooping, but now he’s plagued with problems peeing!

We’ve been able to stave off major problems with diet and the occasional administration of steroids and antibiotics. That is, until two weeks ago. Then Pollux became completely “blocked,” and it was a medical emergency. We were twice at the emergency vet, since it was a weekend, and they finally had to put a catheter into his urethra so he could pee at all. We went through this three times before it was clear it wasn’t going to resolve on its own. They hadn’t found any crystals or stones or anything foreign that appeared to be causing the obstruction. Apparently, just like with his colon, the problems was anatomical (and probably related to the “Manx Syndrome”). And the choice was either to let him die or do the surgery. Of course I opted for the surgery.

He’s lost a lot of weight in the past two weeks, and his brother now dwarfs him again–just like when they were kittens. But Pollux seems to appreciate why he’s had to go through this, and signs of his old self are already shining through. Though he and I are both anxious for the cone-collar to be removed, for the stitches to come out, for the fur to grow back, and (of course) to have the old Pollux back 100%.

Pollux and his brother Castor have also been featured here and here.

8 thoughts on “Pollux Gets a New “Backlook” on Life”